The Harlot in the Cities

The Harlot finally had the chance to get some knitterly love in the Twin Cities on Wednesday night, and I got to have a fun night out.

The event was over in St. Paul and was hosted by The Yarnery, who did an excellent job. There were well over 400 knitters there.

I went with Mama Grouch, Catherine, and Gwenyth and also ran into April, who I hadn’t seen since a spinning class a couple of years ago. We all sat down in a sea of knitters and then proceeded to laugh ourselves crazy for the next hour. She spoke a lot about the stereotypes of knitting and said one thing that really spoke to me, about how in the last hundred years our society has changed how we value our time and handmade goods. To paraphrase, she said that a hundred years ago(and through most of human existance) it was considered a waste of time and money to buy something you could make. Now, thanks to our overly commercial society, it’s considered a waste of time to make something you can buy. I wish I had more time to write about this…maybe another day when I’m not trying to squeeze in a blog posting.

Afterwards we stood in line and had to chance to chat with Chris and Christy and I got a cute shot of them both:

While standing in line April and I realized we had both brought our soakers, an “endangered species of knitting” as Stephanie calls them in her book. Stephanie was excited to see them, and we both got a great picture with her, her sock, and our soakers: 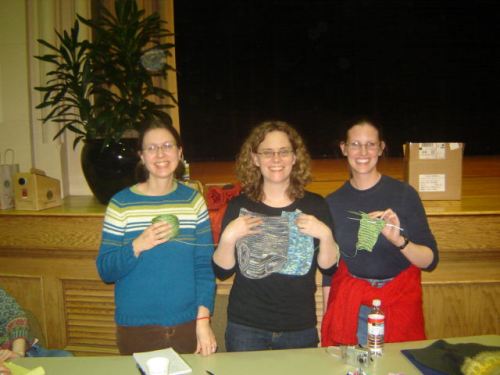 After that five of us headed over to the Bonfire Grill. We were dissapointed that there weren’t more knitters there, but apparently they were having communication problems and told other knitters there wasn’t anyone there, or something weird like that. Anyway, we had an awesome time:

See that giant beer? Apparently I don’t know my ounces very well. I wanted a pint. 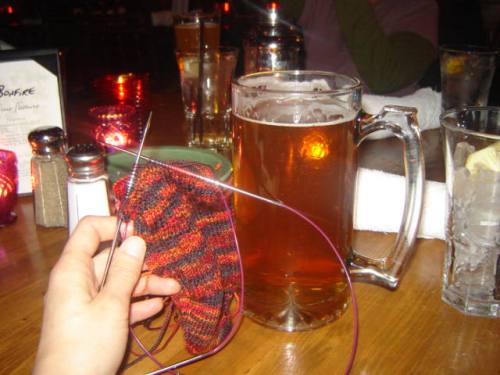 Beer with sock for proportion.

I’m guessing it was a pint and a half, which is a lot for me nowdays. But I said what the heck and enjoyed almost the whole thing. Which might be the reason I was talking a mile a minute to Chris and Christy when I ran into them again while getting ready to leave. I promise I don’t usually yammer quite that much, although we did have a great chat about getting the local bloggers together sometime soon.

Little Man is requesting my presence, gotta run. Have a great weekend!

18 responses to “The Harlot in the Cities”