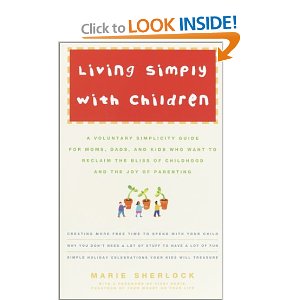 This book, Living Simply with Children by Marie Sherlock found it’s way home with me from the library. I’ve only paged through it so far but I’m excited by what she has to share. The first part of the book is all about the “whys” and the second about the “hows.” I’m especially looking forward to the “hows” since that is the hardest part. I’ll share more once I’ve read it cover to cover.

The not so simple is the fact that we are now back in our house (yay!) after two weeks of living in a hotel while the plasterers/painters did their jobs. The house looks wonderful, but now I’ve got to unpack everything. It’s actually great timing to do this since it fits right in with our plans to simplify in regards to our stuff. I’m planning on being very mindful about what I unpack to keep and what I unpack to get rid of.

I’ve focused so much of the boys stuff and I feel for now we have a pretty decent handle on it. Time to take a break and get a handle on my stuff. That’s the not so simple part.

Although my studio is now that beautiful shade of aqua I’ve been pining for….

I have boxes upon boxes of fabric, books, magazines, and fiber.

And guess where I shoved everything that didn’t fit in a box?

Scary, I know. And remember, there is also a wall of yarn behind all that stuff. Yikes. So the question is, it’s easy for me to let go of my kids junk, or the Skeptic’s t-shirts (enter the contest yet?).  But my stuff? I love it all yet it’s stifling at the same time. I need the room to work and this summer I’ve really felt my creativity being stifled. There is a lot of sorting, planning, a lot of mapping out but very little follow through and not much doing. I used to think I could never have too much yarn, fiber and fabric but it seems as if it’s time to whittle it down. Might be time for  a stash sale and time to be a bit more realistic on what I want and what I need.

This week has found me with new challenges. The final tornado repairs on our house are in full swing. Our house has been overtaken by plaster and paint, which means we are spending our days out and about. It’s a nice break in a way,  a vacation in our own city, but not going about our usual routine puts a bit of a stress on everyone. Math Boy has been with his grandparents for a week having some big boy time. Knittykid and Spinner have been bumming around with me all week, heading out to the Children’s Museum, Hyland Park Reserve and whatever other outdoor spaces we’ve found ourselves enjoying. I’ve realized how blessed we are with our amazing parks here in the Twin Cities. We have huge wildlife reserves, state parks, county parks, city parks…..many right in the metro area. I’ve heard it often said that Minneapolis is the greenest city in America and I believe it. Now if only I could remember my camera when I leave the house…..

I’ve been trying to knit this week, but making little progress. I have an idea in my head for a vest I’d love to knit for Spinner, but I also want to write the pattern down. Of course this involves a chart, which involves trying to learn how to chart using the computer, which isn’t going very well. I can’t figure out how to chart cables. I might just go old school, draw it by hand and scan it in. I have little to show for now other than a wrinkly little swatch. We’ll see where it goes.

Since our house is in a uproar right now I have nothing really new to show you, but I did come up with a fun idea for a contest a few days ago when hanging laundry.

My Simple project involves not only simplifying for the kids, but for the Skeptic and myself as well.

I’ll give you a hint. If you have anyone of the male gender in your house, you have a bunch of them. The older the male, the more you certainly have.

Yup, it’s the classic grungy t-shirt, full of holes. And the Skeptic has heaps.

The contest? Guess how many he has. After the plaster work and painting is finished I’ll be cleaning out his collection (I’ve warned him!) and thinning them out. To give you an idea of the magnitude of the shirt collection:

That should get you started!! The contest rules are simple:

My goal is that he should be able to fit them all in one dresser drawer, easily. Now to convince him to let that many go…..

Stuff. It’s the first thing most people think of when they think of simplifying. While that’s not the only thing, I do think it’s a great place to start. It’s hard to have a clear mind and find that sense of rhythm when you’re surrounded by clutter.

In order to find calmness, you need some space to think, some room to breathe…..

I started with clothes, toys and books back in June and to be very honest, I’m still working on them. But I’ve learned quite a few things in the process that I wanted to share:

So where am I at after two months of this?

The living room now sports a simplified bookshelf, with just enough books for browsing but not so many that they just throw them all over the place. More books are in their bedroom, but the majority of them are downstairs. I’m trying to switch them out as soon as I notice they are tiring of these. There is also a special stack for our weekly library trips.

All the excess stuff was cleared out so that the dress-up basket is just for dress-up. No more random dinosaurs or trains hiding in here. Playsilks, armor and capes….this stuff gets used all the time.

In the sunroom we have….

a cart full of building material,

and fort making supplies. (The cardboard blocks hide behind the chair).

Overall, cleanup is much easier. The kids know aren’t so overwhelmed anymore, and they actually play with their toys rather than just throwing them all around. It feels like a nice playroom now rather than a room full of junk.

Lastly, to be a realist I do need to show the basement closet, which still needs to be dealt with. Here hide the other toys, the toys that were scattered in random pieces all over the house. This is the stuff I need to sort through next, organizing it so it can easily be brought upstairs and used or realizing that it’s just not something the kids play with and finding it a new home.

So yeah, more work to do but I feel as if I’ve finally taken some control back in the house. Now if only I could keep those legos in the boys room from migrating throughout the entire house life would be good!

Next up in my Simple series I’ll share my attempt at simplifying MY own stuff, yarn included!

Care to join me?

As you’ve probably guessed, the book Simplicity Parenting has really changed how I’m viewing our home and family life. The subtitle says “Using the Extraordinary Power of Less to Raise to Raise Calmer, Happier and More Secure Kids” and I truly do believe it. It’s been a long time since a parenting book has influenced me so much. And even if you’re not a parent, I believe that the ideas put forth in blogs such as Zen Habits can make a profound difference in the quality of a person’s life.

There will still be plenty of knitting, sewing and spinning around here, but I’ll also be adding a post each Monday on how I’m using the ideas put forth in Simplicity Parenting to improve life around our household. And I really hope you’d like to join me!

So, if you’d love to create some calm in your life, please grab a button and leave a comment to let me know. Blog about it and share what ideas you have to add some rhythm and some simplicity to your life.

You can dive in head on or take it in baby steps. Either way is fine. Maybe you want to simplify things for your entire family, maybe you need to simplify your creative life so you can be more focused on what you do. Just don’t be afraid to give it a try. I think you’ll find it’s worth it!